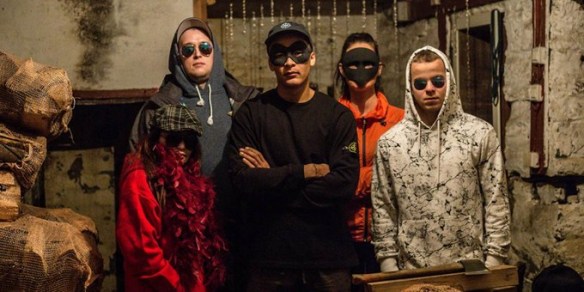 Like many companies, Bergen National Opera has been engaged in “write an opera” projects for a number of years – scores of children have benefited and have produced intriguing, surprising and joyful results.

But earlier this year, BNO decided to push things further: what about write-an-opera for adults? So we chose a fairy story – one with all the right Norwegian ingredients: a troll, a princess, a lonely boy, a greedy “bad man”. We summoned the great bass-baritone Sir Thomas Allen, chose two young Norwegian singers and invited 17 somewhat startled amateur singers from Førde to join. And we made an opera which astounded its audience in the packed tiny barn at Åmot Gaard, as part of BNO´s Mimi Goes Glamping Festival in August.

The idea of took hold. Hanne Frosta, Food Director for Mimi and supervisor at the island prison at Ulvsnesøy, a remarkable facility where the inmates play a major role in building and sustaining their own community, asked us to visit the prison to see if we could find a mutual project. Now, a new opera has been born:Trollet på Fantøya, which premieres on Saturday December 10th.

BNO believes profoundly in the power of opera, that most open-minded and flexible of art forms, to bring people together. Stories told by music combine our two heartfelt instincts – the need to share our words and feelings, and to express our voices in song.

Yes, BNO as a company stages major operas in custom-built venues and employs some of the world´s greatest artists. But to work with a prison, with people totally new to opera, and to build something from scratch together is a new, unpredictable and inspiring experience. Together, this random team is coming together: we all want quality and every single one of us wants to be as proud as can be, come the premiere.

We started the process with meetings. Some were shy, some were wildly ambitious, some were bored, some were excited. We talked and talked, shared food, sang a bit, discovered surprising skills and stories, and settled on staging the show in a big tent, serving food, running a Christmas Market, and involving everyone on the island. Solveig, the supplies manager will play the Troll (after much persuasion); we chose a princess (very shy) and a prince (even more shy) and as they told their own personal stories, director Tom Guthrie began to shape the show.

Now we´re on a roll. Inmates and staff are memorising lines and tuning strings, building the set, making props – great birds on sticks – and cutting branches to make an indoor forest. Others a cooking up a feast from the local lamb. We´re all singing with a bit more confidence and a fair amount of giggling. Some of BNO´s young chorus singers have joined us, we´ve formed a basic orchestra from drum and guitar playing inmates along with Hardanger fiddle. Everyone is furiously knitting warm seat covers for the tent – our drummer Tor Ivar, with his massive ear-piercings and whole arm tattoos is becoming expert – and as we all get to know each other better, there are a lot of “wouldn´t it be great if….” conversations.

And, the press are taking note: TV and print journalists are paying attention, and a magazine journalist is coming from the UK. A paper for prisoners and staff – called, unbelievably, Insider Times – has asked for pictures. One of the writers, curious about the mix of opera and inmates, said “OK, so this is something completely different from art?”. No, no – we said. This is what art does. It changes peoples´ lives, in institutions, in draughty tents, on islands, in the rehearsal room. If we´re lucky, after Saturday, we´ll never be quite the same again.