Oslo, minus several degrees, the landscape monochrome with luminous streaky skies. Bergen National Opera is in the capital at Operaen with a fine mix of nationalities and three Nordic composers to develop new operas for premiere in March.

This morning we slither over hard-packed ice to the rehearsal room to work on Øyvind Mæland´s new opera – one of three short works which Bergen National Opera has commissioned for Borealis Festival. The violinist is missing, the bass player is deep in discussion with conductor Steffen Kammler, and the singers are practising small swooping sounds and spitting consonants. Øyvind´s little opera is about tiny emotions – twitchy moments of apprehension, compassion, embarrassment – and the music is lucid, varied, and wonderfully eccentric.

Yesterday, Rebecka Sofia Ahvenniemi´s opera – a ‘trailer’ involving Beyoncé and female power – provoked fierce conversation. Ahvenniemi herself, an animated elf of fizzing energy, has a way with words: “Guitar” she says “you have an important role in creating confusion at this point.” The guitarist plucks with enthusiasm. Rebecka´s music here is full of collisions. Baroque vocal lines underline splintering string sounds, and Beyoncé song quotes croon over Straussian harmony. “Let´s go into this late-Romantic porridge a little earlier” she says briskly, adjusting her score.

In the canteen, singers from Operaen´s in-process production of Bellini´s Norma – the director is upcoming young Norwegian star – are noisily at lunch. A large baritone in fur, cape, Tolkien-like garb, is munching salad and barking on his phone. Long straggly hair, large boots and facial hair abound, along with Hollywood blondes and some startling make-up. Meanwhile the ballet corps are fiddling with their feet and giggling – other than a tiny ballerina who is crying quietly in the corner. Our guest BNO director, Sjaron Minailo, is wrangling cheerfully with dramaturg Gaea Schoeters. “How can you ask the composers about their ‘point of urgency’” says Gaea, rolling her eyes “it´s such a nineties question”. Sjaron mimes indignation “Really? Well how do we put it for our new cool age? Where´s the edge? I want to know their critical message.”

He had asked this of all of the writers at yesterday´s session. Our third composer, the quiet, thoughtful Lars Skoglund, had talked about how his opera – which takes place in a library where three people, an awkward triangle, converse in fractured whispers – reflected his fascination about how conversations chose words in a space where texts line the walls. Rebecka had talked about female assertiveness – a line in her opera talks about Beyoncé wanting to ‘wear a suit, go to meetings’. Our only male singer present, Halvor Melien, a proud recent attendee at a Beyoncé concert, spoke up fiercely ‘What! I don´t recognise the male sexuality you´re talking about!’ and we hastily moved on to how new violin bowing might produce white noise, and how to scream elegantly “without sounding like a horse” says Halvor helpfully, recovering tranquillity.

On Day Two, Annelies Van Parys – award-winning Belgian composer whose Private View Bergen National Opera co-produced with seven European partners in 2016/17 and is now with us here as a mentor – is discussing microphone techniques with singers Elisabeth Holmertz  and Lore Lixenberg, Lars Skoglund is handing out revisions and Øyvind Mæland is doubling as rehearsal pianist. Ahvenniemi is in the canteen writing furiously.

Exciting times – to have three new works in development, each one brilliantly individual in its sound world, each one topical, each one visually distinctive, is remarkable. Don´t let´s worry about our future opera. It´s all in good hands. 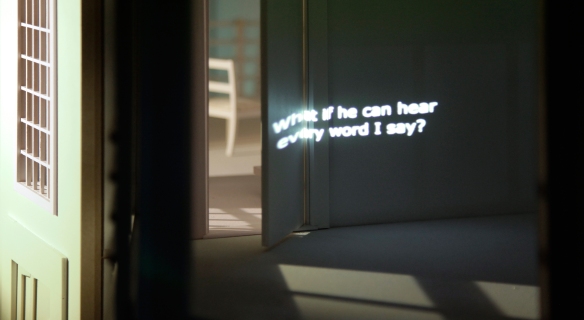 It´s a mystery to me why Opera Vlaanderen use the strange Hotel Lindner in Antwerp as its go-to accommodation for guests. It’s one of those hotels where you are jolted awake at dawn by over-zealous housekeeping hoovering the corridor, with no clues about what city you are in and your chin mildly chafed by super-scrubbed sheets. Emerging into Antwerp´s diamond quarter, elderly Jewish men in huge hats are poking each other in the chest and squabbling gently in the street while smiling police are silently removing a protesting drunk.

The opera house is hosting the world premiere of composer Annelies Van Parys and poet Jen Hadfield´s first collaboration Private View – an opera which began when the two were introduced by Bergen National Opera at one of the development academies which the organisation runs for Norway´s AdOpera network, aimed at enhancing all aspects of creation and production.

Based on Hitchcock´s Rear Window, the work has made a considerable journey. Irish director Tom Creed came on board early, followed by the Dutch video collective 33 1/3. With Hadfield, a T. S. Eliot prizewinner, based in the Shetland Isles and Van Parys in Belgium, the video team in Amsterdam and the ’midwives’ BNO and Musiektheater Transparant in Bergen and Antwerp respectively, nothing was simple.

But the premiere, attended by the great and good from Opera Europa and all six co-producing cities including Berlin and Luxembourg, was a startling success. Three singers manipulate three large boxes, each of which presents an individual video screen. These then periodically combine to create one large surface. The film shows clips of Rear Window, but also multiple voyeuristic images of scenes framed in New York windows: couples arguing, a solitary anxious figure; a frustrated wife.

The music is exquisitely scored, with wonderful sounds from the ensemble (the pristine Asko Schönberg ensemble) and marvellous characterful singing from three singers from Stuttgart´s Neue Vocalsolisten. It is mysterious, dark, funny and elegant.

At the reception, as champagne circulates, Opera Europa´s Nicholas Payne tells me a terrible story about a well-known singer who has just had to murder her children onstage in a performance of Cherubini´s Medea. What, he had asked her, did she think about when having to enact such a scene? She had replied, looking at him icily, ”I think about my children´s father”.

Leaving these various murders behind, I head to Vilnius, where the production which Oskaras Korsunovas created for Bergen National Opera in 2013 is to premiere with our co-producers at Lithuanian National Opera and Ballet Theatre. It’s a formidable occasion. Black ties and ball gowns in the crowded auditorium. Vicious green and pink cocktails on the bar, along with tiny cups of thick hot chocolate – the kind which guarantees long nights of insomnia.

I sit next to the Prime Minister, who has a smile of dazed brilliance. Behind sit two armed bodyguards and the Culture Minister. Oskaras has worked intensely on the production adding video and tightening the dramaturgy. Our Leonore from Bergen, English soprano Rachel Nicholls sings astoundingly. The Prisoners´ Chorus is heartbreaking, and the finale, where it seems that the whole world has erupted onto the stage in all its myriad diversity, is made profoundly moving by the addition of monochrome film of Vilnius´s all too recent liberation from Russian oppression. The audience is silent and stunned. Then exultant.

Mozart and the Eurovision Song Contest

On then to Vienna, for auditions and to listen to Theater an der Wien´s accomplished young ensemble. At the airport, there appears to be an infestation of strange green elves, before I clock that the Eurovision Song Contest opens next weekend. The hoppy-skippy elves are distributing information and seem mildly embarrassed and (correctly) are not entirely convinced that those stumbling off dawn flights will appreciate the intended irony. A group of jolly students is gurgling through Thank you for the Music at the baggage carousel.

But I´m off to listen to Mozart, Tchaikovsky, Britten, Massenet and to talk to much respected colleagues. Vienna, most songful of cities, is bathed in sunshine and ready to sing. Coffee, then I´m more than happy to listen.